Across Oceans and Revolution: A Principled Life

Why and How (I Became an Activist, a Red, a Radical, a Revolutionary) 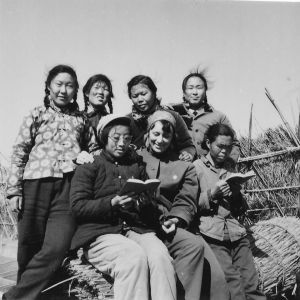 Married in 1928, my parents bought a schooner for our home.

The pregnancy before me was aborted, but, when the ship returned

from a cross-Atlantic cruise, I was brought aboard

My brother, a winter child, came aboard in 1932 at the age of two weeks

and promptly became the Commodore.

Growing up at sea, I still maintain a special relation

with the stars, the clouds in their many forms, and

a healthy respect for the powers of nature –

sharks and seagulls, sun and moon, wind and wave.

common dangers, along with respect for authority

based on knowledge in service of the common good.

conditions, but I cannot.

Radicalization #2: People, when organized, can contend with

powerful forces of nature and society.

Sometime before I was five, my parents met a Soviet ship in the Baltic,

a government sponsored ship, with a crew from all walks of life,

various professions, who chose a sailing vacation without fees.

WOW! WONDERFUL! A way for everyone to sail without regard to income!

For the USA to do likewise, when proposed to the Duponts and the Morgans,

We can’t send our sons on cruises with you if you keep talking that way!”

endlessly, it seemed to me then.

What is this thing called COMMUNISM?

I was eleven when my parents joined the Communist Party, USA.

My parents took a stand…

an unpopular stand in Marin County and throughtout our land.

Radicalization #3: Notes came from two of my closest “best friends”

in high school: “I cannot be your friend because you are a

I felt sorry for them.

“…materialist dialectics holds that external causes are the condition of change,

and internal causes are the basis of change.

In a suitable temperature, an egg can change into a chicken,

but no temperature can change a stone into a chicken,

because each has a different basis.”*

My brother did not become an activist.

My son did not become an activist.

Radicalization #4: I became an activist, a radical, a revolutionary

as an internal necessity with the suitable external conditions.

“Oh, so you chose to be a revolutionary!”

How can one look around the world and NOT be a revolutionary?

Don’t you see the racism?

…the injustices, the lies, and deceptions?

…rip-off of the poor by the rich, of the many by the few?

to my teen-age parties, as, many years later,

I find recorded in my FBI file. Radical? Subversive? Apparently so.

first one and then another, and another,

with the FBI still keeping an eye on me,

so indignant strangers, neighbors, told me.

all self-defined. Learning to tell them apart takes time,

“It is not hard for one to do a bit of good.

What is hard is to do good all of one’s life and never do anything bad,

to act consistently in the interest of the broad masses.” **

Umpteenth Radicalization: Approaching 79 and still trying to serve the people.