Across Oceans and Revolution: A Principled Life 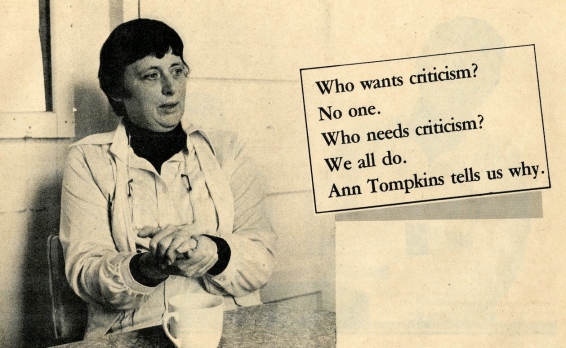 In 1974, Ann wrote a long pamphlet titled “Constructive Criticism and Self-Criticism: A Method for Preventing and Solving Problems.” She also created workshops on the subject. She had heard the phrase “Criticism/Self-Criticism” used in China, but had never received a full explanation of its meaning and application. She set out to create a meaning and a course of action which were based upon her experience and political understanding and which could be used by people in the United States. The pamphlet (which is available as a reward in her Kickstarter campaign) begins with the following explanation of what will be found within:

WHAT? What is criticism and self-criticism? What are the forms for doing it?

HOW? How is criticism and self-criticism done?

WHEN? When does one do criticism and elf-criticism? When do you use one concept, when use another? When do you expect results? When do you criticize this, when that?

WHO? Who does criticism and self criticism? Who should be criticized? Who can judge what is right or wrong criticism?

WHERE? Where can criticism and self-criticism be done? In China? In the USA? In everyday life? In personal and/or political relations? Individually? In groups? In task oriented groups? In a class of strangers? In the home of friends?